At Novaschool Sunland International we have a beautiful swimming pool of 25 meters surrounded by hedges and sun pipes, equipped with showers and shade.

Swimming is one of the most complete sports at the psychomotor and cognitive-affective level: it is recommended by specialists as an enriching activity for physical, psychic and affective development.

Lessons include games and exercises as a team, as a couple and individuals, focusing on acquiring the technique of the different styles. Thanks to the educational swimming project we get our students to have a good base of movement improving their water skills and competencies.

Swimming allows pupils to improve their cardio-respiratory abilities, promote their postural alignment and benefit muscle coordination. In this way, they develop sensory and psychomotor abilities to gain more strength in the muscles. In addition, moving in a environment that is not common involves creating interpersonal and social relationships.

As during the rest of the year, Covid-19 measures continue to be respected in all PE classes, including the swimming ones. It is essential that students respect the rules, take care of the material and follow the instructions while they are in the changing rooms.

Inside the duly fenced and closed pool space there is a shed to store all the necessary material for the curriculum. In our school it is mandatory to teach swimming lessons from the age of 3 and of course we hire a qualified lifeguard. Multiple studies reveal the many benefits of swimming from an early age.

During summer it is usually used also for Summer Camp. The pool is also used for IGCSE PE exams and students are engraved in their class to formalize the practical part of this subject.

Malaga, May 20th, 2013. Last Sunday the Novaschool Sports Club presented its different sports sections. The gala, held at Añoreta, brought together athletes and children from all the sports clubs of the following centres: Novaschool Añoreta, Novaschool Benálmadena and Novaschool Sunland.

The presentations took place during two sessions (morning and afternoon). The event started at 10:00 am with a spectacular Taekwondo exhibition. After that, the Ballet Club gave two wonderful performances; the Novaschool Benalmádena students centred their performance on the Swan Lake melody and the Novaschool Sunland International students based theirs on the theme “Pocahontas”. Apart from this, all families could enjoy the 5-Side Football Club, the Swimming Club and the Triathlon Club presentations. The Judo Club was the last exhibition in the morning which instructors and students enjoyed together.

The afternoon presentations started at 4:00 pm with the Tennis Club presentation. Later, the Skating Club made a spectacular entry by skating inside a Chinese dragon. Then it was the Funky and Hip Hop Club’s turn with a great choreography. Just at the end of the afternoon the whole Basketball Club took centre stage. It was certainly a great family sports Sunday.

The Novaschool Sports Club would like to thank all the Novaschool Staff and congratulate all the athletes that enable us to offer a high quality sports programme in Novaschool. 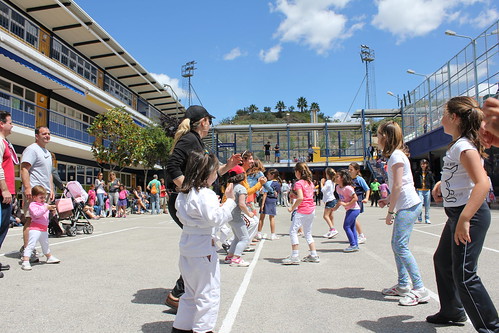 Click on the link to see it full gallery

Málaga, 14th February, 2013. David Meca captivates the Novaschool educational community. At 11.30am, the Swimming World Champion´s conference began  at the Añoreta bilingual school. More than 400 people attended, among which were secondary and 6th Form students of Novaschool Sunland and Novaschool Añoreta, monitors, and pupils of the Novaschool Swimming Club and Triathlon Club.

The swimmer talked about his early days in water sports, despite his tough childhood which was marked by health problems and hard training. He explained that with constant work, perseverance and effort he has achieved numerous professional merits:  The number one world ranking of long-distance swimming, World Champion in 1998-2000-2005, leader in the 2001, 2002 and 2003 World Rankings, and the first swimmer to win four medals in a World Championship.

David Meca left the crowd speechless. For two hours the pupils were listened and paid attention to each of the stories, experiences and videos that the athlete shared with all the members of the school. Pupils were impressed by the inherent values of sport that Meca highlighted and transmitted in his lecture, without which, he claimed his professional and personal life wouldn´t have been the same.

Motivation, effort, pressure, teamwork, challenges, discipline, suffering and perseverance are some of the values that have been essential in the Spanish swimmer´s life, and this is what he transmitted to the pupils. “A good champion is not born, but made”, were the last words of this successful conference which caused a respectful silence amongst all the spectators in the room.

After the conference, David Meca participated in a radio program `enComunicación´,  on the radio network ES.RADIO MÁLAGA, that was transmitted live from Novaschool Añoreta.