If there is one thing that characterises our school, in addition to its excellent educational programme, is that we have extensive facilities within a natural and a unique environment.

At Novaschool Sunland International we know that adapting to changes is fundamental to the academic development of our students, even more given the current circumstances. For many years we have been accustomed to outdoor teaching, with our students enjoying their classes in our gardens and paved areas, enjoying the wonderful weather and the outdoors activities.

At the beginning of the 2020-2021 academic year, Novaschool Sunland International saw many new improvements, and without a doubt the one that has pleased teachers, students and families the most has been the creation of new spaces to hold classes outside.

Teaching outside at Novaschool Sunland International has not limits 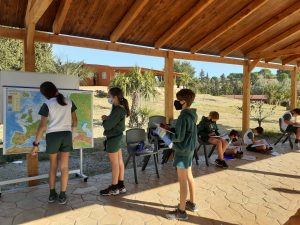 We now have in total 7 new ‘patios’ and 2 outdoor areas to hold classes outside. Every time a teacher wants to make use of one of these areas, they only have to reserve that space, so that the educational team is perfectly coordinated, with the aim that all classes can enjoy at least one session a day outside. 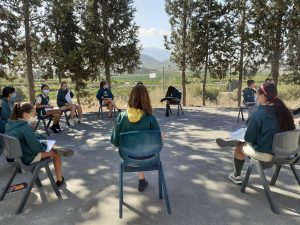 Our teachers are also enjoying these new areas because they can teach their lessons safely, always maintaining social distancing with the advantage for students of being able to breathe fresh air.

At Novaschool Sunland International we have introduced these improvements in our day-to-day life, taking the opportunity to implement new educational techniques; always counting on the continuous training of our teachers.

Both students and families are delighted by these new measures implemented from the beginning of the school year; our students are granted a safe learning environment and are certainly having more fun!

Two pupils, Maria Maese Gómez (age 6) and Maria María Castro Carmona (age 10) wonder what they are going to do with such a long holiday .They decide to visit various countries using an airport trolley. Pupils aged from 3 to 11 years old entertain them as they travel to Mexico, Italy, America, France, Canada, and England, returning by boat to Spain. There, they celebrate a fiesta, singing “Viva España” and dancing, together with friends from their travels.

It was produced by Hilary Depper, year 2 teacher, assisted by other members of the staff.

Last Friday, the class of 2012 graduation ceremony took place at the Novaschool Añoreta centre followed by a gala dinner for students, teachers and family members.

Malaga, 4th June, 2012. Memories, emotions and happiness are the words that describe the Friday afternoon at Añoreta. The class of 2012 graduation ceremony was held on an afternoon in which the Novaschool Añoreta and Novaschool Sunland students were the main protagonists, as deserved. All eyes, including those of families and teachers, were upon them.

It began with the academic ceremony in which the Novaschool Añoreta principal, Elvira Baez, the Novaschool Sunland International principal, Mark Woolley, the vice-principal, Ada Valero, the Head of studies of both schools, Fatima Lamb and Rachel Evans, and tutors, Patricia Rodriguez, Ali Bagherian and Rosa Ortiz, dedicated a few moving words to the students and wished them all the best.

Later, the guest of honor, Jose María Troya, director of the Malaga University´s School of Computing, along with the Novaschool CEO, Francisco Barrionuevo, also delivered a message in which they highlighted the importance of effort, work, commitment, perseverance and responsibility in their coming university years. After all the speeches, scholarships were awarded followed by the students´ diplomas, proving that they have completed their studies in the Novaschool Añoreta and Novaschool Sunland centres.

The second part of the ceremony took place in the dining room and began with a cocktail which was served in the playground. This was followed by a dinner for families, teachers and students in a dining room decorated for the occasion (covered with flowers, candles and lights) in order to send the future university students off in style.