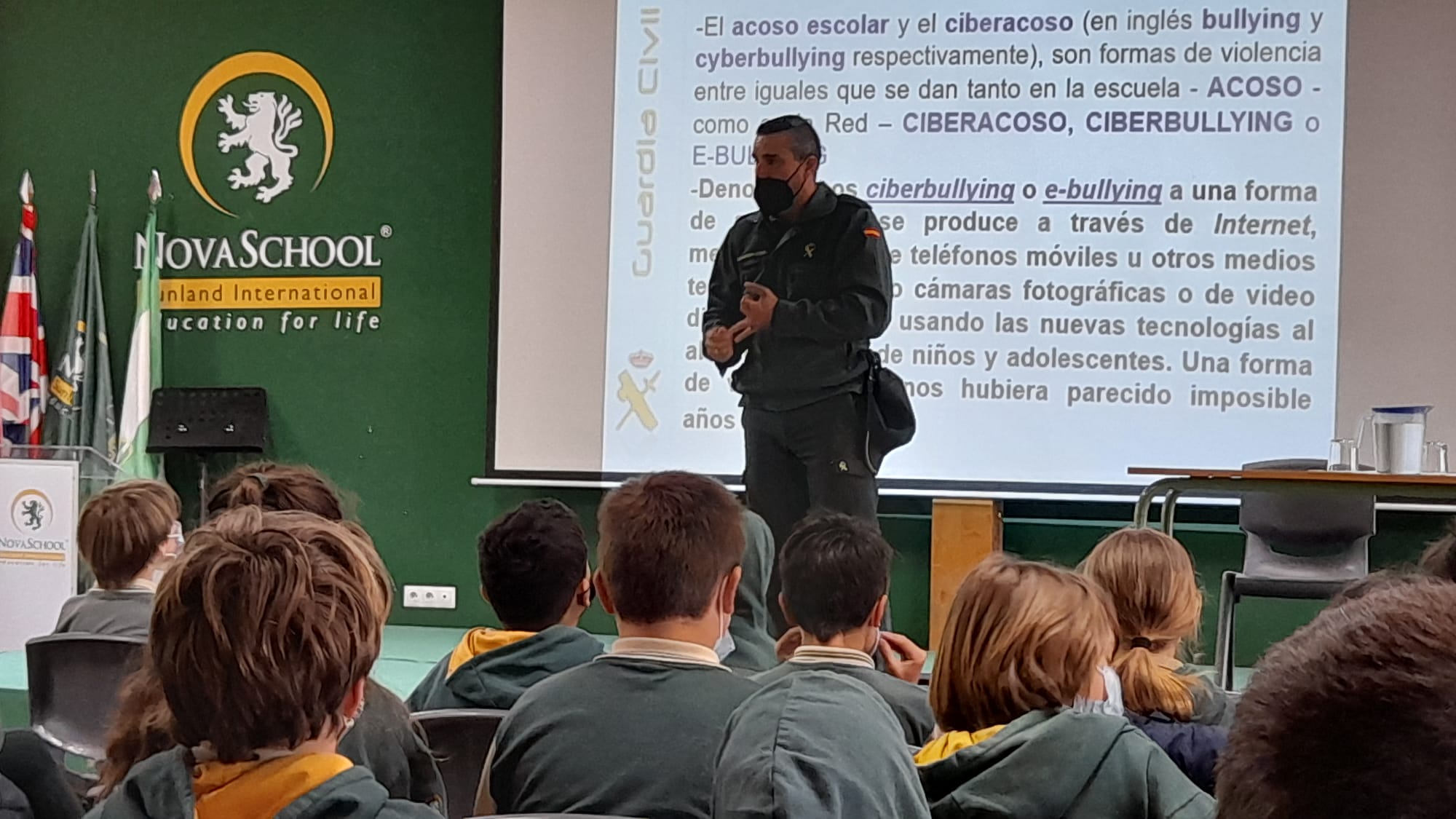 This morning our Y6 students attended a very interesting talk to reflect on bullying, how to avoid it and how to act if we suffer it or see someone who is a victim of it.

The Civil Guard, as part of its Master Plan for the Coexistence and Improvement of Safety in Educational Centres and their Environments, is carrying out a series of training sessions, including talks on bullying. These chats specifically address the prevention of it with the aim of raising awareness about the importance of curbing this anti-social behaviour.

Bullying is a fact that is increasingly frequent in schools and manifests itself physically and psychologically repeatedly by a student or a group. It has a significant violence component among pupils aged 6 to 17 through aggression, isolation, threats, teasing and insults.

There are different ways in which it can manifest:

These episodes usually happen throughout break time, in the bathrooms, in the common areas at times such as the change of class, the entrance and exit to school and in the line for dining and transport. They can also occur within the classroom, usually when the teacher is attending  others or while writing on the board.

It is estimated that between 15% and 50% of children and adolescents may have been victims of bullying at some point in their lives, inside and outside school. The problems generated lead to the development of a series of psychological disorders that directly affect physical and mental health in the long term.

Some groups are more vulnerable and at greater risk of suffering episodes of harassment: those people perceived as ‘different’, who have difficulties of social integration. At the same time, it is very likely that the harasser is a subject who has also been previously harassed and who has no empathy, is violent or lives an unfavorable situation at home.

The consequences of school bullying are suffered by all parties involved: the victim, the aggressor and everyone who witnesses the bullying. Above all, for those who witness it without reacting as passive spectators and develop a lack of sensitivity to unfair situations. It is very likely that such young people will become tolerant adults unable to respond to episodes of violence.

There are a number of indicators that the victim can manifest which alert family and teachers: depression, anxiety, insomnia, apathy, introversion, isolation, fear, restlessness etc. Therefore, identifying risk factors and taking measures to avoid cases of bullying is imperative.

From Novaschool Sunland we carry out different awareness actions in line with today’s talk, such as training workshops and educational campaigns. We encourage transparent and fluid communication between families and teachers of the centre to work together in order to avoid episodes of abuse.

We act at different levels, from various perspectives, to prevent cases of bullying within our school. The intervention on our part as professionals is precocious and acts forward to end the wall of silence that rises around those who suffer it. In Novaschool Sunland we promote the values of empathy, respect and solidarity through our ideology and philosophy of centre.

The participants have been enthusiastic and proactive throughout the talk. We always sensitise our students and all school staff to create a serene environment and avoid any type of conflict that may generate episodes of violence. We are very proud of it.